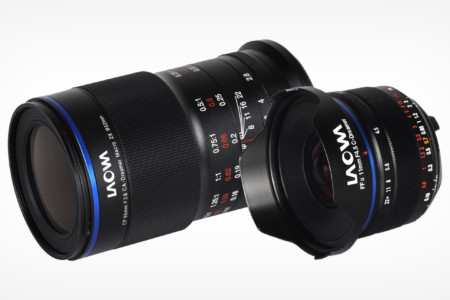 When Canon and Nikon debuted an entirely new mirrorless mount, the companies faced a chicken-before-the-egg problem with limited glass for the new bodies. That dilemma was originally solved with adapters, but as the RF and Z systems gain more ground, third-party lens companies are filling in the gaps. The China-based Venus Optics recent lens launch is one of those gap-fillers, with its Laowa 65mm f/2.8 2x Ultra Macro in a Nikon Z mount (APS-C) and 11mm f/4.5 FF RL lens for the full frame Canon RF.

Nikon has yet to craft a macro lens for the Z mount outside of earlier F mount lenses that can be used with the system via adapters. Previously available on Canon EF-M, Fujifilm X and Sony E mounts, the lens is now available for the Z mount. The lens is, however, designed for APS-C cameras, which means the lens is meant for the Nikon Z 50, though APS-C lenses can still be used on full-frame sensors in a crop mode.

With twice the magnification of a typical 1:1 macro, the 65mm is a manual focus lens. The lens focuses internally to avoid bumping the lens into small subjects. The lens is designed from 14 elements in 10 groups, including an Apochromatic optical design to fight chromatic aberration. The lens, which only weighs 11.8 ounces, lists for $399.

For Canon RF shooters, the Laowa 11mm f/4.5 FF RL is now accessible. Previously available in the Nikon Z, Sony FE, Leica M and L mounts, the optic is now available for Canon’s full-frame mirrorless system. While some 11mm lenses are classified as fish-eyes, the Laowa 11mm is a rectilinear lens that fights barrel distortion for straighter lines.

[Read: The Best Telephoto Lenses for People and Portraits]

The Laowa 11mm f/4.5 FF RL weighs 8.9 ounces and measures 2.5 inches long. Made with two aspherical elements and three extra low dispersion elements, the lens is manual focus only. The lens retails for $699.

The new launches offer a lens wider than Canon’s current RF lenses and a macro where Nikon has none. Third-party companies are the only other options for the niche lens type, including optics from Meike and 7artisans, outside of using adapters. Nikon’s lens roadmap does include two macro launches before the end of 2022; Canon’s rumored lens map for 2021 includes a 10-24mm, which would be the widest in the lineup.