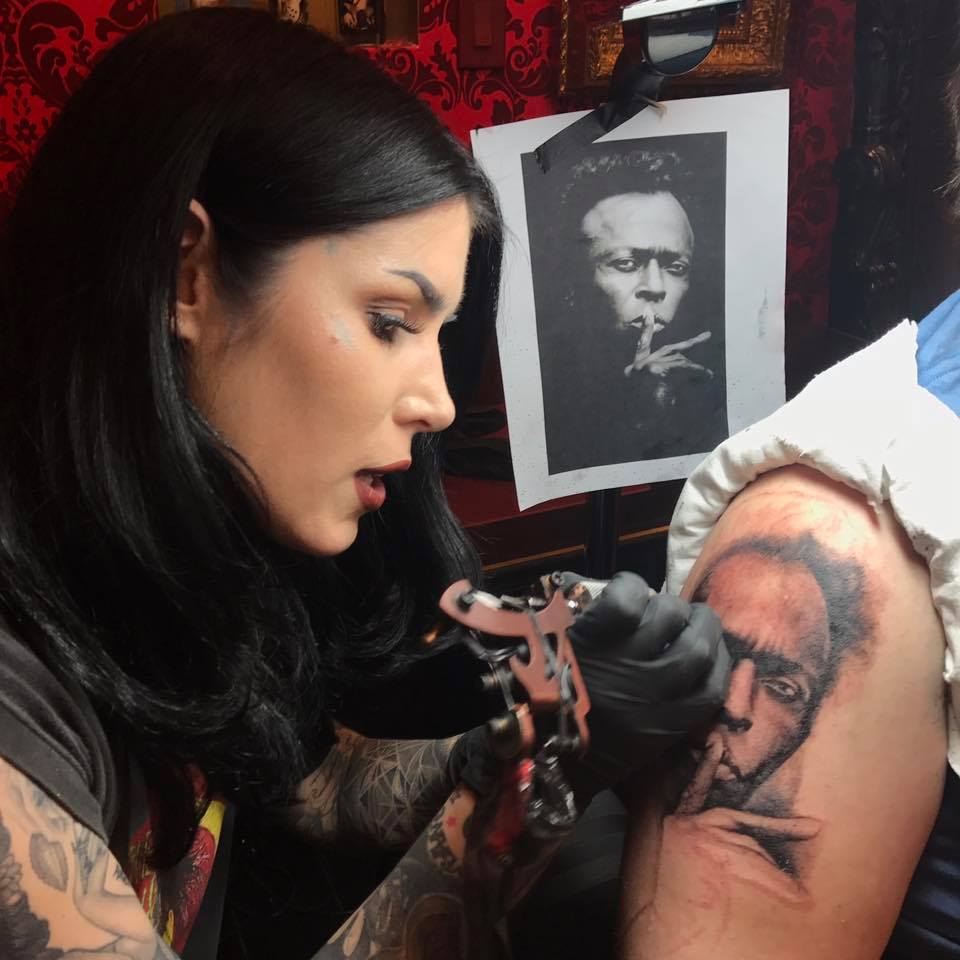 One of the first steps photographers often take over copyright infringement is a DMCA takedown request—but what if it’s a case where a photographer sues the tattoo artist because the infringement is permanently etched on someone’s skin? Jeff Sedlik, the Los Angeles photographer behind the iconic Miles Davis photo that he took 30 years ago, with one of the singer’s finger’s pressed to his lips, is suing celeb tattoo artist Katherine Von Drachenber, better known as Kat Von D from the TLC series LA Ink, for inking the image on a client’s arm. The case was filed in a federal court in California earlier this month.

[Read: Fair Use or Copyright Infringement: An Analysis of the LeBron James Social Media Lawsuit]

The photograph, originally taken in 1989, was once on the cover of a JAZZIZ magazine issue and noted by LIFE as one of its “Pictures of the Year.” The image, which portrays a dramatically lit headshot of the singer with his finger up to his lips, has been used—legally—on licensed products such as
T-shirts.

[Read: 6 Copyright Cases You Should Know About]

In a statement to Billboard, Sedlik said that he had reached out to the tattoo artist before filing the suit, but his requests were ignored. The lawsuit also alleges that Von D took credit for the work. In the lawsuit, Sedlik is asking for the images to be removed from print, websites, and social media, along with damages of $150,000 for each work featuring the tattoo. He’s also asking for profit earned from the tattoo and legal fees. It’s unclear how many times images of the tattoo were distributed.

Starting a tattoo from a photograph is a common practice, particularly when inking a portrait. The lawsuit putting the tattoo artist as the defendant could have a ripple effect on both industries. As Copyright Lately points out, the question is whether or not using the photo in a tattoo is altered enough to constitute fair use.

There have been several cases of tattoo artists filing suits for a reproduction of an original tattoo — including multiple cases against video game designers for replicating a celebrity’s tattoo. Another lawsuit was filed when The Hangover Part II used Mike Tyson’s tattoo — which is a registered copyright — on another actor. Those cases, however, were settled out of court, and the tattoo artist wasn’t the defendant. According to Legal Zoom, there has yet to be a federal court decision regarding tattoos and copyright laws.